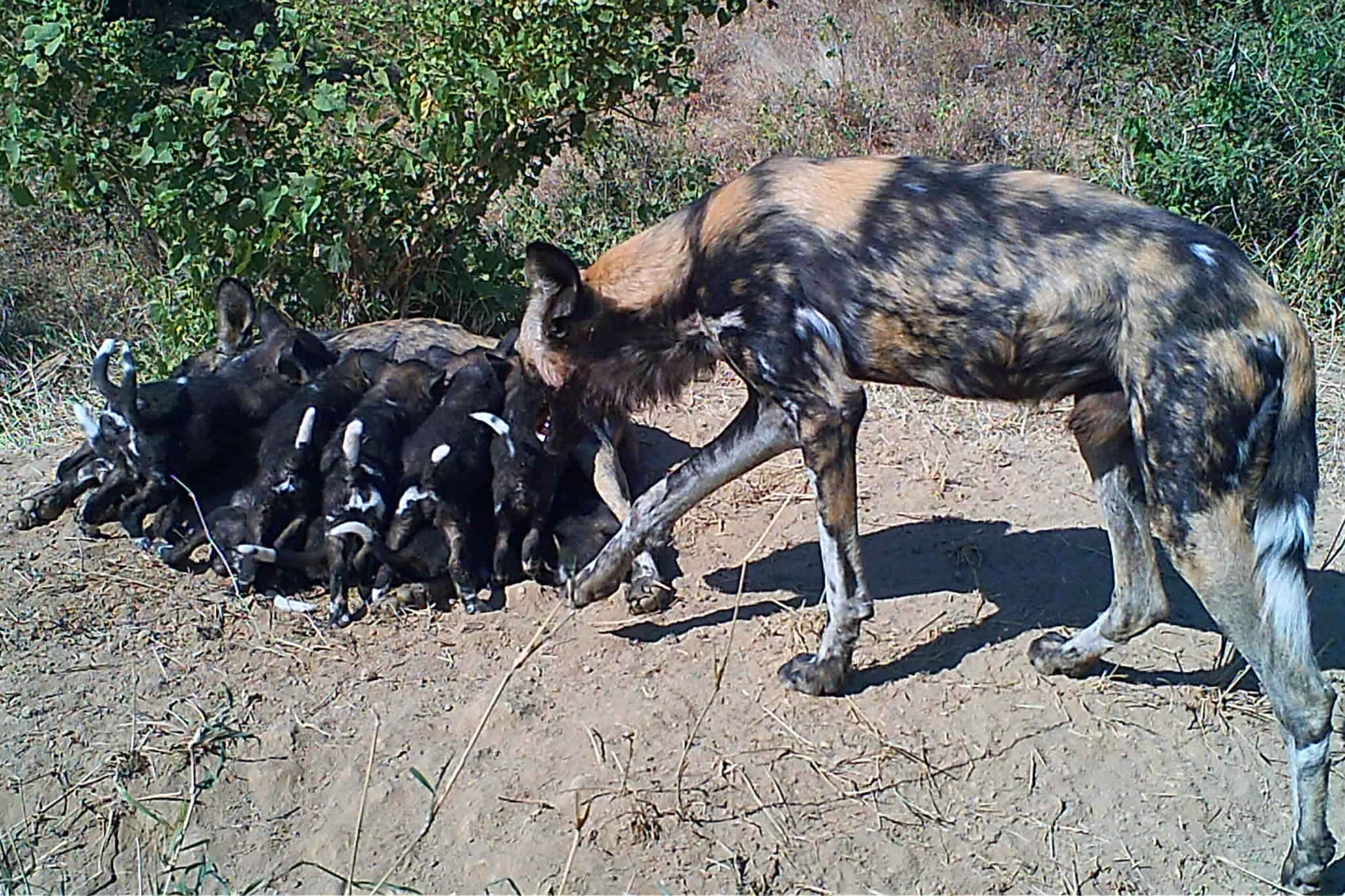 The Gonarezhou Predator Project is a collaboration between the African Wildlife Conservation Fund and Gonarezhou Conservation Trust, and focuses on monitoring the population trends and addressing the threats facing the large carnivores of Gonarezhou National Park. The Gonarezhou Predator Project began in 2009, and today comprises on-the ground tracking and monitoring, annual spoor surveys, periodic call up surveys, and hands-on conservation (removing snares and treating injuries as needed, active anti-poaching). A key part of the project is monitoring and safe-guarding the resident wild dogs in the Park, including satellite/GPS tracking of some individuals to record range size and determine whether dogs move beyond the Park’s boundaries, as well as monitoring of denning success.

Rueben Bote, who is employed by AWCF, is our on the ground tracker and scout who has been monitoring and working on wild dogs and other large carnivores for over 20 years. Rueben spends at least 8 months of the year in Gonarezhou monitoring large carnivores and searching for resident wild dogs and their den sites. Through the use of camera traps at den sites we are able to non-invasively monitor the packs and collect incredibly important data, including; number of puppies born, good identification photos, whether any of the dogs are carrying wires etc. Rueben has located 8 dens in the Park so far this year!

The wild dog population has shown significant growth. In 2009 it was estimated that there were only about 30 – 40 adult and yearlings, but by 2017 their numbers had grown to 107 adults and yearlings across 11 packs. With the number of wild dogs and other large carnivores increasing, so is the importance of maintaining and opening up safe corridors between Gonarezhou and surrounding wildlife areas to give them more room to roam.

Wild dogs are susceptible to infectious diseases such as rabies which can be introduced by free roaming domestic dogs from neighbouring communities. In 2006 the wild dog population of Gonarezhou was nearly wiped out due to rabies. A key focus of the project is to run and/or support rabies vaccination campaigns in communal areas to reduce the risk of rabies in domestic dogs surrounding the Park.

A further threat that wild dogs are very susceptible to is being caught in snares. The fact that wild dogs move in packs, are similar in height to impala and range so widely makes them particularly vulnerable. A further function of having Rueben on the ground is for him to be able to routinely check for the presence of snares on wild dogs. Once a wild dog (or any other animal) with a snare is seen we make a determined effort to relocate it and remove the snare.

The dogs are most active in the morning and evening, resting in the shade during the mid-day heat.

Please let us know if you happen to see any wild dogs during your time in Gonarezhou. If possible try to take a side-on photograph of as many individuals in a pack as is possible – preferably both sides for each dog. Every dog has a unique coat pattern which makes them individually identifiable.

Please send photo’s to rosemary@africanwildlifeconservationfund.org to help us put together identikits for as many dogs/packs as possible in Gonarezhou, and help us to better understand the habits and status of this endangered species in order for us to give them better protection.