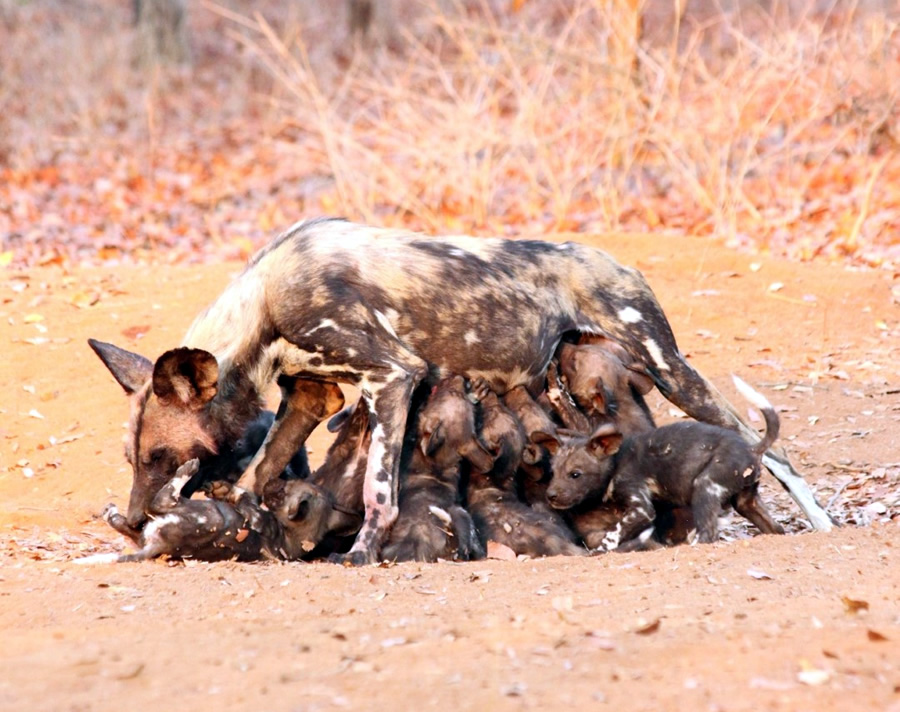 This is predator country

Gonarezhou National Park is turning into prime predator country, with lion, cheetah and spotted hyena populations reported to be doing well. The wild dogs, however, are flourishing.

Through the Gonarezhou Predator Project (a joint project between the Frankfurt Zoological Society, the African Wildlife Conservation Fund and the Zimbabwe Parks and Wildlife Management Authority), the den sites of nine packs of wild dogs were located in the park last year, while three more packs were noted (though their dens were not located). As such, there should be a minimum of twelve packs of wild dogs in Gonarezhou. For the most part the packs are large and litter sizes are good. At the end of 2015 a minimum of 105 adults and 75 pups in 12 different packs were confirmed, but it is now estimated that there are likely to be at least two more packs.

The dens were well spaced out in the park and it’s safe to say that wild dogs are utilising Gonarezhou to its full extent and are doing well. This is despite an increasing lion population and may be the result of the two species increasing concurrently, allowing the wild dogs to modify their behaviour to avoid being negatively impacted by lions.

Unfortunately, the wild dogs are also facing threats from outside the park borders. A number of them were noticed with snares; mostly on packs resident in the Mabalauta subsection, indicating a wire snare poaching problem in or around the south of the park. Though continuous efforts are made to remove the snares, it is extremely challenging to get close enough to them for darting.

An African wild dog killed by a vehicle was also found on the Chikombedzi Road. All evidence suggested the dog, an adult male (possibly the alpha male), was killed by a speeding vehicle. The back right leg was broken at the hip, and the carcass was just to the side of the road. There were no signs of a snare, bullet, lion bite etc. This emphasises the need to encourage careful driving along these main roads in the park.

September 2015 also saw the Large Carnivore Spoor Survey take place. Data showed the lion population continues to increase steadily, and there are now an estimated 125 lions in the whole park. Relative to other populations (in Kruger, Hwange, Selous and Serengeti) the lion density in Gonarezhou is still very low, suggesting the population could continue to increase further. Tourist sightings are also picking up correspondingly.

A potential cause for concern is, however, the park’s leopard population. There has been a decline since its highest density in 2012 when there were an estimated 524 leopards in the park. This dropped to only 450 in 2013, 398 in 2014 and 388 leopards in 2015. This may simply be a natural fluctuation.

Though spoor surveys are not an ideal technique for surveying cheetah, they are valuable indicators of trend, but numbers must be treated with caution. Results from this survey suggest a total population of 90 cheetah in the whole park, which represents a healthy population for a species which is naturally low density and wide-ranging.